Reflections on the first decade by Dugald McDonald 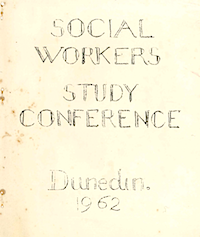 At the time of the Social Workers’ Study Conference held at Dunedin in 1962, I was a trainee social worker still finding my way around the mysteries of life in the public service, university and marriage.  That gathering is generally held to be the event that led directly to plans for the formation of the New Zealand Association of Social Workers.  Eight people gave presentations at the Dunedin Study Conference: five women (all social workers) and three men (two academics and a deputy permanent head). These presentations were later edited and published by Margaret Wildman (1962).

The prevailing influence of Freudian theory was evident in the following extract from the paper by Professor of psychiatry Wallace Ironside from the University of Otago.

Why choose indeed!  This is the kind of archival gem which I hope we may be able to debate in our reunion sessions at the National Event this coming November in Christchurch.

The New Zealand Association of Social Workers was formally inaugurated in 1964 at the Auckland Inaugural Conference. This

was a relatively high level affair bringing together academics, mid to top-level public administrators, social service administrators and frontline social workers from the state sector, NGOs, and religious organizations. It was, and remained for some time, a rather male-dominated organization.  At first, a small executive body answered to a National Council made up of representatives from the regional branches meeting once or twice each year.  Eventually, this gave way to a broader, more task-oriented Executive which would rotate around the country mainly aligned to the locations of the Biennial Conference.

In his Presidential address, Merv Hancock set out three main objectives for the new association: advances in training, a forum for debate, and social work research. Building on those imperatives the NZASW grappled with three major challenges during the first decade of its existence.

In 1964, I was the secretary of the Canterbury Association of Social Workers Incorporated.  With the formation of the New Zealand Association of Social Workers on the Seventh of February, I was the next day the secretary of the Canterbury Branch of NZASW.  I represented Canterbury at the first-ever National Council meeting in Auckland.  For me at the time, as a former social work trainee and now a Child Welfare Officer, they were heady times.  In the early days, the Association had the flavour of some elitism, and like the vexed question of education and training desirable or necessary to become a social worker, it could be divisive in the work place.  Some were for it, some indifferent and some hostile.

As for many other people, my involvement with NZASW had a few periods of consistent activity interspersed with inactivity.  Joining the Education and Training Committee in Wellington in 1966, I was asked to convene it when I moved back to Christchurch the following year.  That led to appointment to the Interim Board of Studies for which I was Secretary until it was finally dissolved in 1976.  University teaching and time spent living abroad kept me out of serious action for nearly a decade until 1985.  That year I convened and chaired the new Complaints Advisory Committee until it was reconstituted as the Ethics Committee upon which I served for a decade. Managing the update of the Code of Ethics was my “swan song”.