During the 1970s social action and protest activity to advance human, civil and political rights were not uncommon.  In January 1977 protesters occupied Bastion Point after the government announced plans for a housing development on former Ngāti Whātua reserve land.  In the same year, an amendment to the New Zealand Security Intelligence Service Act considerably expanded the agency’s monitoring powers and brought protesters to the steps of Parliament.

During this year the NZASW confirmed its commitment to human rights and social justice with campaigning activity defending the rights of prisoners to vote, and advocating womens’ rights to choose on matters of abortion.

Since the Electoral Act of 1956, all persons “detained pursuant to convictions in any penal institution” had been excluded from electoral registration.  One of the reform measures of the third Labour government (holding office between 1972 and 1975) was to re-enfranchise prisoners under the Electoral Amendment Act 1975. The Minister of Justice at the time remarked that;

[T]he imposition of a criminal penalty involves the penalty of deprivation of liberty, but it should not  mean a deprivation of all civil rights, and after conscious consideration we have concluded it would be proper to allow people in custody, as this Bill provides, to cast a vote. (cited in Robins, 2006, p. 168)

In the end the Elector Amendment Act 1977 disenfranchised prisoners once again.  Subsequent legislation modified this position and the topic of the right of prisoners to vote continues to be debated.

A woman’s right to choose

In the same year the association was also active in attempting to influence the Contraception, Sterilisation and Abortion Bill 1977.  This Bill was proposed as a result of the work of the Royal Commission on Contraception, Sterilisation and Abortion.  The NZASW contributed to a petition to ensure that any legislation concerning termination of pregnancy should be open to public debate by being referred to a Select Committee.  It also drafted a letter to all Members of Parliament making recommendations about the need for professional counselling services and commenting on other clauses contained within the Bill.

If you were involved in the work of either of these campaigns why not post a comment on your reflections below?

Submission to the Select Committee on the Electoral Amendment Bill 1977.

Abstract of report of the Petitions Committee on the Contraception, Sterilisation and Abortion Bill 1977.

Letter to MPs on the Contraception, Sterilisation and Abortion Bill 1977.

Robins, G. (2006). The rights of prisoners to vote: A review of prisoner disenfranchisement in New Zealand. New Zealand Journal of Public and International Law, 4(2), 165–195. Retrieved from http://www.victoria.ac.nz/law/centres/nzcpl/publications/nz-journal-of-public-and-international-law/previous-issues/volume-42,-december-2006/robins.pdf

In 1971 Keith Holyoake – the Prime Minister of the second National government – was still in power, there were anti-Vietnam War protests in Queen Street, and (in the USA) Charles Manson was found guilty of the murder of Sharon Tate and four others.

At this time the fledgling New Zealand Association of Social Workers (NZASW) was engaged in a campaign to influence government proposals to merge the Department’s of Child Welfare and Social Security into an integrated Department of Social Welfare.  Mary Nash (1998) describes the two different schools of thought that existed inside the association at the time: the idealists and the pragmatists.

The idealists were opposed to the amalgamation of Child Welfare and Social Security, considered that it was proposed for political, economic and administrative reasons which did not consider client interests. They did, however, approve of the idea of a Department of Social Welfare that would unify the provision of statutory social services in a one door policy along the lines recommended in the Seebohm Report for England and Wales.  They were opposed to the administrative combination of social service with income maintenance.

The pragmatists, while not disagreeing with these points, believed that changes were inevitable and that it was preferable to co-operate and have some input into developments that would protect the rights of the client. They recommended, therefore, that the Association make a case for time to be taken over the necessary deliberations that should precede the implementation of the amalgamation. They wanted the Association to ask that a White Paper on the Government’s amalgamation proposal be published before legislation and that the Royal Commission on Social Security should also report before further action was taken. (Nash, 1998, p. 198).

In the end the association decided to hire the services of a public relations consultant and to mount “A serious and expensive campaign…in order that the principles which inform social work should be taken into account in the amalgamation process” (Nash, 1998, p. 199). One output of this campaign was the publication Social Welfare at the Crossroads (NZASW, 1971), “a blueprint which not only argued against the amalgamation of the Child Welfare Division and the Income Support Service, but also put forward a comprehensive alternative which paid meticulous attention to the practicalities of implementation and which called for increased resources for the education and training of social workers”. (Nash, 1998, p. 199)

Holyoake refused the request for a full public enquiry, or a Royal Commission into the social services, and insisted that the new Department of Social Welfare would have responsibility for training statutory and voluntary social workers.

the Association replied with a forceful letter urging him to take more time to give the country the opportunity for debate on the matter. The Wellington branch reacted with a resolution which expressed their ” ‘amazement and deep concern’ at the ‘indecent haste’ with which the Government was rushing this legislation through. They went on “We believe that the Government’s purported aim of achieving complete amalgamation by 1 April 1972 points clearly to their lack of interest or regard for what the public and social workers think about social welfare”. (Nash, 1998, p. 199)

You can download a copy of the Social Welfare at the Crossroads report, and one of the campaign posters, by clicking the images above or the links below.

Are you the sort of person who likes solving mysteries? If so we invite you to help us to identify the voice of the mystery American presenter who appears on an audio tape found in the archive of the ANZASW.

END_OF_DOCUMENT_TOKEN_TO_BE_REPLACED

In 1915,  Abraham Flexner M.D. made a speech to the National Conference of Charities and Corrections in Baltimore USA on the topic Is Social Work a Profession? He concluded that it was not.  In what has been described as an “infamous and inflammatory speech” (Tice, 1998, p.54), he advanced several arguments for this position one of which was that:

A profession must find a dignified and critical means of expressing itself in the form of a periodical which shall describe in careful terms whatever work is in progress; and it must from time to time register its more impressive performances in a literature of growing solidity and variety. (p.23)

END_OF_DOCUMENT_TOKEN_TO_BE_REPLACED 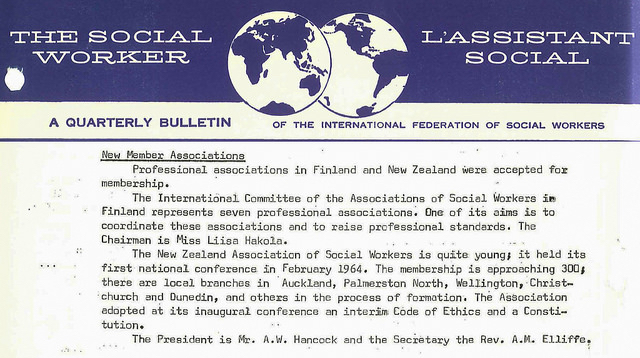 END_OF_DOCUMENT_TOKEN_TO_BE_REPLACED

Today the ANZASW digital history project releases the  NZASW Incorporated Report of Inaugural Conference, a report published following the four-day event in Auckland from 4th to 7th of February 1964. The look and feel of this handsome report is a fitting tribute to the gravity of the event it was published to mark.  The foreword tells us something about the work that was undertaken to prepare for it:

END_OF_DOCUMENT_TOKEN_TO_BE_REPLACED

Merv Hancock was the driving force behind the establishment of the New Zealand Association of Social Workers.  Ann Aburn (2014, p. 73) tells us:

It is well known that the idea to form a national organisation for social workers was Merv Hancock’s brainchild.  At that time, Merv was the District Child Welfare Officer in Palmerston North and soon, with his enthusiasm and boundless energy, he had inspired us with his idea of having a New Zealand-wide organisation for all social workers, not only those in government departments, but also voluntary agencies.  Previously, while in Dunedin, Merv, together with Arch Eliffe, had formed an Otago Association of Social Workers.  Groups had also been set up in other districts. So, having these contacts, Merv canvassed social workers throughout the country. There was a consensus that there should be some formal national association, so he started the ball rolling.

END_OF_DOCUMENT_TOKEN_TO_BE_REPLACED

In 1962 John F. Kennedy was the US President, the Berlin Wall was under construction, and the Cuban Missile Crisis pushed the world to the edge of a nuclear catastrophe. Bob Dylan released his debut album.

In Aoteroa New Zealand Keith Holyoake led the second National Government (a government that was to retain power for almost twelve years). The exodus of Māori from rural areas to the cities was in full swing (one of the most rapid movements of a people in world history) and the Government passed the Māori Welfare Act 1962 establishing the New Zealand Māori Council, Māori Wardens and Community Officers.